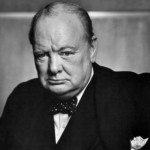 He led Britain to victory in the Second World War.

The Prime Minister is head of the UK government and is responsible for its policies and decisions.

He or she appoints government officials, such as members of the Cabinet.

He or she is active in the House of Commons, often participating in debates, answering questions from fellow MPs, and making formal statements.

The Past Seven Prime Ministers: